As mentioned on the blog a couple of times this month, Imagination’s PowerVR graphics is celebrating its twenty-five-year anniversary this summer! That’s a very long time in tech, and the shelves around the PowerVR Developer Technology team here in Kings Langley reflect that. Unlike most tech cupboards, they contain a lot more than just some nests of cables and semi-functional keyboards. So what better opportunity to share some of these historical artefacts with the world? Therefore, following on from my post where developers related some of their PowerVR memories, here I’ll open up the DevTech team cupboards to give us a glimpse of some of the PowerVR history that lies inside…

First up – a bit of PC graphics card history – the utterly enormous Midas 1! The original intention behind the design was to create a much smaller arcade board than the huge ones used at the time by Sega and Namco. Simon Fenney was one of the original designers at the time and you can read more in his blog post about the work done for Midas. Suffice to say that development work was going to be difficult, so it made sense to make a more modest PC card – and here it is:

As per the informative post by David Harold, the story continues with the PCX1 made in conjunction with NEC in 1996, before moving onto the PCX2 with the m3D Matrox in 1997.

In 1999 we teamed up with STMicro who created the Kyro and Kyro II, which were brought to market in a Hercules graphics card. Lurking in some drawers, I dug out more literature. Click on any of the images to see the full-size version. 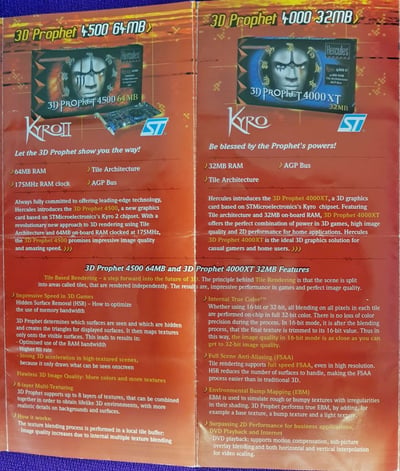 Advertising for the 3D Prophet cards 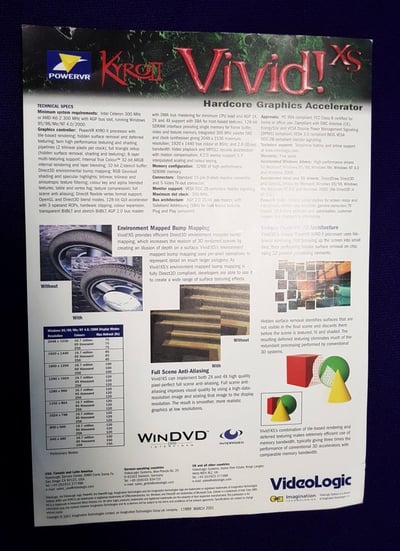 Some of you may remember the VillageMark benchmark test. This was a depth complexity benchmark which was very important in the early 2000s, as everyone was implementing the first early depth rejection techniques e.g. hierarchical depth comparison. PowerVR was pixel perfect and far faster than its competitors of the era! Here’s the original map of the village – the textures used were photographs taken by the team in and around Kings Langley! 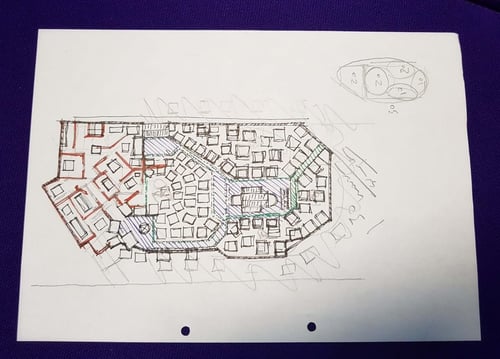 The famous Dreamcast console (8MB of memory) used the CLX2. This is the same graphics chip as in the Neon 250 and the NAOMI arcade boards. The NAOMI1 also shared the same SH4 CPU but had the larger 16MB of memory. Speaking of which, unsurprisingly, we unearthed plenty of Dreamcast history… take a look! 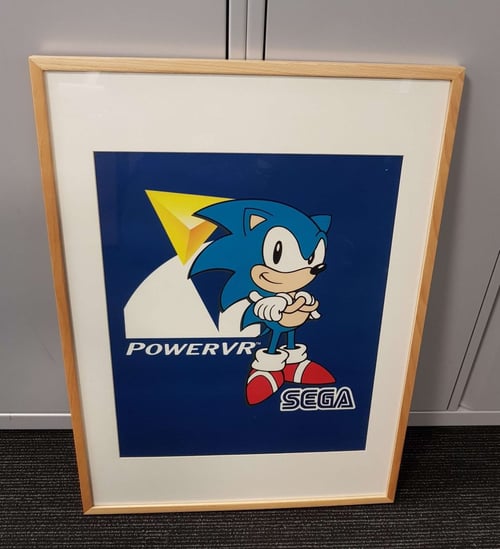 This was a present (later framed) from Sega. 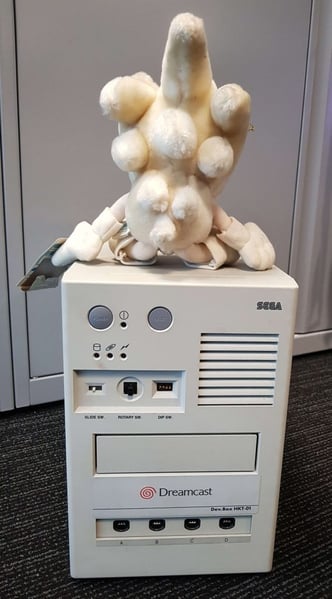 And this is an original Dreamcast Katana developer kit, complete with extremely rare “white” Sonic showing his spikes.

The mouse is not a mouse for the Dreamcast – it’s a conventional PC mouse branded with the Dreamcast logo collected at Devcon 2000 held in London. This was apparently one of the best developer events ever in terms of merchandise! All the developers at Devcon also got a GD-ROM with all the Dreamcast demos on. Very few people had these burners; usually, only Sega could burn the GDs, which meant they’d have to be sent off to Sega. 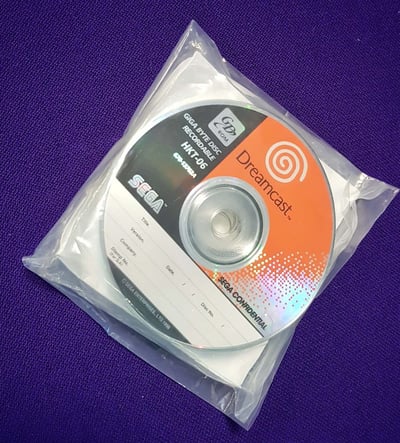 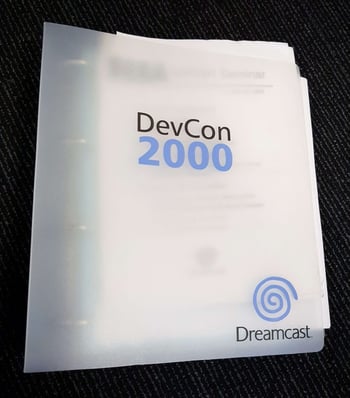 A folder of notes from DevCon 2000 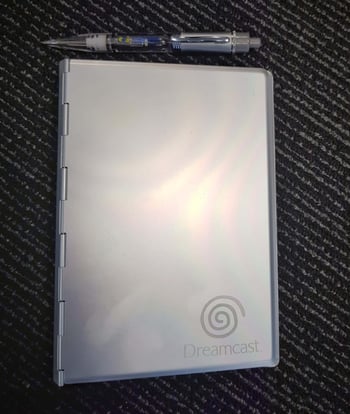 A Dreamcast Filofax! (and an Imagination pen photobombing there).

A Sega Sound Box
(Complete with tragically coloured-in White Sonic by persons unknown  – Jacek, we are watching you!) 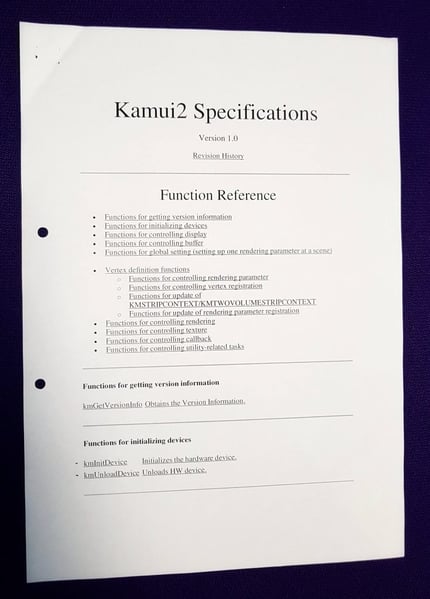 A page from the Kamui2 (Dreamcast Graphics API) (we have the lot but obviously no space to reproduce it here!).

Moving to another cupboard, there are a lot of old CD ROMs with all sorts of interesting SDKs and toolkits on them. Take a look! 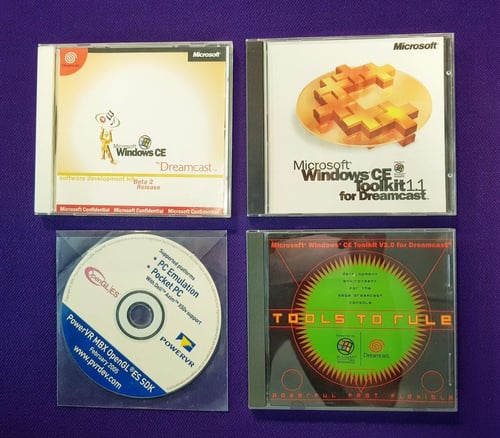 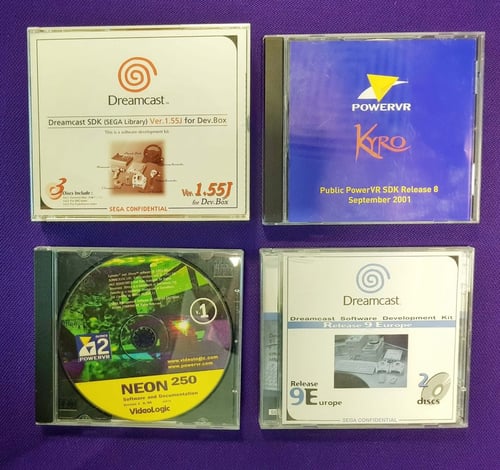 Japanese SDK at the top left, Europe bottom right. And some drivers for the NEON 250! 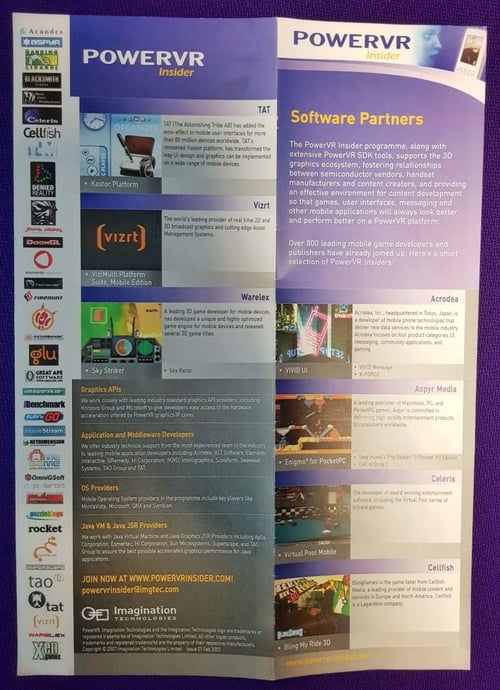 Of course, PowerVR evolved and had enormous success as it moved into mobile devices first in the MBX (Series 4 – well known for being in many big name mobile devices of the era), SGX (Series 5 – same, also big with tablets), Rogue (Series 6, 7, 8XE) and very recently Furian – Series 8XT – first licensee announced! Sadly, I didn’t find anything worth photographing to do with these later GPUs (we don’t do a lot of physical printing these days!), but if you want to know more about any of PowerVR’s history, I’ll refer you back again to David Harold’s excellent blog post.