If you’ve been keeping track of the evolution of mobile graphics in the last decade, you might have noticed several trends that have changed the industry to the core. Probably the most visible and often talked about is the rapid increase in performance and feature set. It is becoming clear that high-end mobile GPUs are delivering more innovative technologies that surpass desktop PCs and consoles when it comes to the overall efficiency (i.e. performance per mW) of the design.

However, there is another important trend revolutionizing the mobile graphics industry. At the start of this decade, a new family of GPUs was introduced every two to three years, followed usually by a minor update in between; these designs were reused in different configurations across a range of devices. Now we have reached the point where the accelerated pace of innovation in mobile graphics means we deliver yearly significant scaling in performance as well as feature set. This accelerated release schedule is also designed to coincide with the progress made by APIs and Moore’s Law

We are constantly pushing the boundaries of what’s capable in mobile.

This brings us to our big announcement today. With our Imagination Summit taking place this week in China, we are unveiling two brand new PowerVR families.

This article focuses on the PowerVR Series7XT family, while a second blog post covers the PowerVR Series7XE line-up. Read on after the break to find out how we have improved performance, reduced power consumption and added market-leading features to create the ultimate GPU roadmap for next-generation flagship devices. 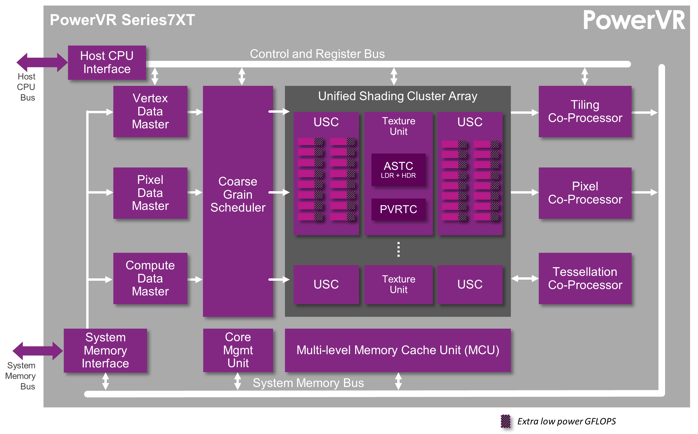 All PowerVR Series7XT GPUs are based on the same underlying architecture:

PowerVR Series7XT GPUs are up to 60% faster clock for clock, cluster for cluster compared to how Series6XT counterparts perform in graphics benchmarks.

All these new added hardware capabilities ensure we have the right functionality required to support the latest feature set of the most popular graphics and compute APIs, including OpenGL® ES 3.1 + AEP, OpenGL® 4.4, OpenCL 1.2 FP, RenderScript, and DirectX 11.

GFXBench 4.0 from Kishonti is a next-generation graphics benchmark

This unprecedented level of performance offers developers the chance to implement console-quality effects like HDR rendering, realistic 4K texturing, physically-based shading in mobile applications. The animation below illustrates the level of realism that PowerVR Rogue GPUs offer for mobile graphics.

We have made several changes to our USCs (Unified Shading Clusters) which improve performance and deliver better efficiency. The internal architecture of the Series7XT USC is presented in the diagram below:

While the number of FP32 and FP16 slots remains unchanged from Series6XT, we’ve added an optional FP64 ALU for every pipeline to ensure developers have access to every type of precision and computing resources when needed:

You can find the full specs for every member of the Series7XT family.

Although you usually tend to hear people talking about virtualization in the context of CPUs, it is actually a system-level requirement that can only be implemented optimally if all the components in the chip support it.

PowerVR Series7XT and Series7XE GPUs implement a set of extensions to the Rogue architecture that enable efficient hardware support for virtualization. These virtual GPUs can be added to virtual machines running on hypervisors. A priority based mechanism ensures each virtual machine efficiently gets the required amount of performance, ensuring robust performance across all virtual clients. 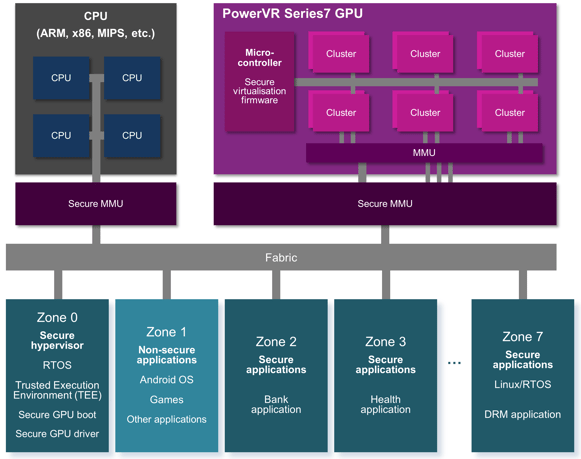 One of the important features of virtualization is isolation — the foundation of an improved security framework for mobile and embedded devices. Since virtual machines are isolated from each other and from the underlying physical architecture by default, they deliver the security principles needed by device manufacturers in mobile, automotive and other embedded markets. For example, software developers can implement better secure mobile payments in games or prevent malware attacks when consumers are interacting with the UI.

You’ve recently heard a lot about AEP (Android Extension Pack), a new optional feature set that Google has introduced in Android 5.0 Lollipop. This collection of extensions is a superset of OpenGL ES 3.1 and contains several extensions that provide native support for advanced graphics functionality in mobile devices.

Tessellation is one of the new features of the AEP and offers developers the possibility to create scalable artwork and smoother looking characters or to seamlessly adjust the level of detail in large, open environments. The animation below shows how tessellation can be used for terrain tessellation effects:

PowerVR Series7XT GPUs are ideally suited for a wide range of mid-range and high-end devices where ultimate performance and efficiency are essential. Devices where you’ll likely see these new graphics processors include mid-range to flagship smartphones, premium to high-end tablets, gaming consoles, smart cars, notebooks and other personal computing platforms.

The PowerVR Series7XT family comes less than one year after Series6XT was announced at CES 2014, and roughly a year after the first devices using Series6 GPUs were in the hands of consumers.

Imagination continues to set the pace of innovation in mobile, creating a new benchmark for the graphics industry with every PowerVR launch. We are very excited to see Series7XT and Series7XE GPUs appearing in devices later next year.

For more news and announcements related to PowerVR, keep coming back to our blog and follow us on Twitter (@ImaginationTech).

* PowerVR Series7XT GPUs are based on published Khronos specifications, and are expected to pass the Khronos Conformance Testing Process. Previous generation PowerVR Rogue GPUs have already achieved conformance. Current conformance status can be found at www.khronos.org/conformance.