IMG A-Series: the GPU for generation 2020

It’s no secret that every year brings a significant advancement for our GPUs – after all, they are one of the things that we’re best known for. However, this time things are a little bit different. Yes, we are today announcing a new GPU, but we’ll come right out and say it – this year we haven’t made a significant step forward. No… this time we’ve made an exceptional leap forward. Today, we are proud to introduce IMG A-Series.

A-Series is not only a range of new cores, but it also introduces a new GPU architecture too. The headline figure? A-Series is 2.5x faster (or 150%) for the same area and same power compared to our currently shipping PowerVR GPUs. Normally, a 20-25% uplift in performance on an annual basis would be welcomed making this nothing less than an exceptional leap over to current shipping hardware, such as the PowerVR Series9XM in the Oppo Reno Z. This increase means we are inherently more power efficient too, and for the same performance, we are now 60% lower power too.

This gives A-Series one of its most appealing characteristics – sustained operation without clock throttling – which is certainly going to please gamers. Even with the continued popularity of consoles, for many the smartphone is the most frequently used gaming platform, making it even more likely you’ll want to have a long gaming session on your phone, whether that’s on the train home or inside your home. With an A-Series GPU, you’ll able to enjoy outstanding gaming performance that won’t slow down from overheating.

While A-Series is certainly great for gaming we are also proud of its enhancements for many markets, including automotive, set-top box and DTV and server. That’s why we’re referring to it as “The GPU of Everything.”

The enhanced AI abilities of A-Series are key to that. Our devices are now becoming ever more “intelligent” with uses ranging from face recognition for logging in, automatic image classification of our photos, or enhancing photography – and this requires SoC to offer more performance for machine learning, typically through neural networks. The A-Series caters for this with 8x the TOPS (tera operations per second) performance of the Series9XM. 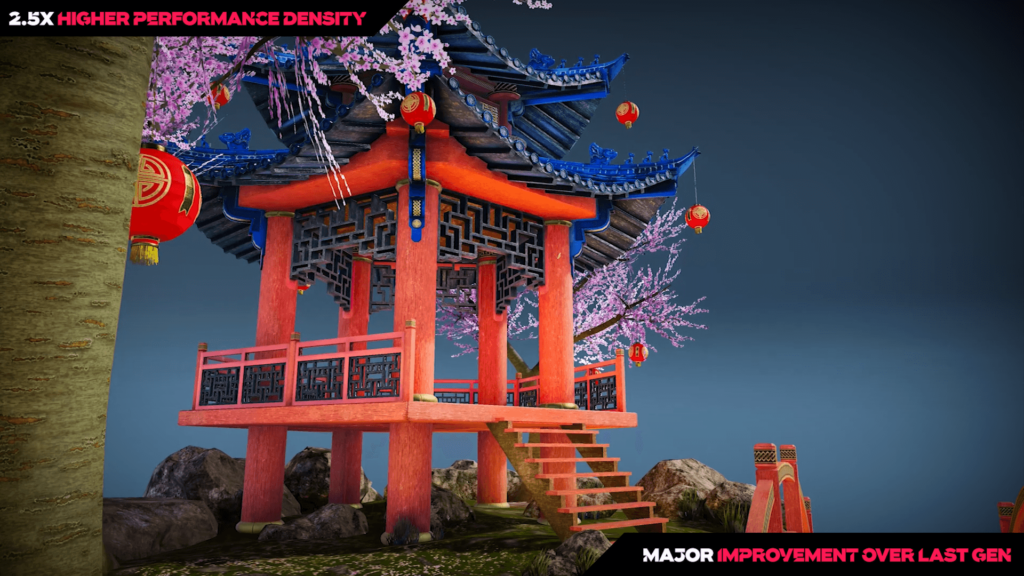 To cater to all parts of the market, today seven cores are being announced across three product categories: A-Series AXT, AXM and AXE.

You might have noticed the absence of PowerVR in the name – but that’s not to say A-Series isn’t a PowerVR product – it is. However, rather than being part of the name, PowerVR now refers to our underlying rendering method that remains at the heart of the A-Series, and what continues to differentiate us from the competition, namely tile-based deferred rendering

The numbers in the core names aren’t arbitrary but are a guide to determine performance. The first figure refers to pixels per clock for fill rate focused high-resolution gaming and the second represents FP32 operations of performance – representing compute capabilities. At the same time, the range can also offer up to eight tera operations per second (TOPS) for integer calculations used by quantized neural network calculations – or in other words – AI.

With such a significant performance boost in the A-Series over our current shipping parts, you may be wondering how we achieved this in one leap. The improvements stem from a large number of enhancements from across the board as summarised in the image below.

However, the single most significant source of speed-up would have to be the changes to the ALU. The ALU, or arithmetic logic unit, is a fundamental part of the graphics processing unit where calculations are performed for both graphics and compute tasks. For A-Series we have moved from a dual MAD x32-wide ALU to a single MAD 128-thread wide ALU. By moving to a 128-thread wide unit we are now able to perform many more instructions per clock, which is fundamental to improving power efficiency. Of course, keeping that ALU fed with data is critical and we have implemented several mechanisms to ensure we can do that. The result is excellent performance with low power consumption. The design of A-Series is also highly scalable, so we can go from one to four scalable processing units (SPUs) to create cores that match the market requirements, while still keeping area size to a minimum.

A new feature of A-Series is that cache sizes can now be configured to their preference, allowing implementers to significantly reduce GPU bandwidth requirements. More system-level cache can now be put down to reduce the need to go to system memory or to allow the use of less expensive external RAM to reduce power, thermals and system cost.

It’s not just raw horsepower – A-Series also delivers what we like to refer to as “impeccable pixels”. What this boils down to is a series of techniques for offering great performance without sacrificing image quality. To do this we use many techniques new and old. We have our unique PVRIC4 image compression technology that uses either lossless or highly optimised lossy compression to guarantee bandwidth reduction of at least 50% as well as a memory footprint saving of 50%. We also have new algorithms for level of detail and anisotropic filtering, both of which can make a tangible improvement to image quality. 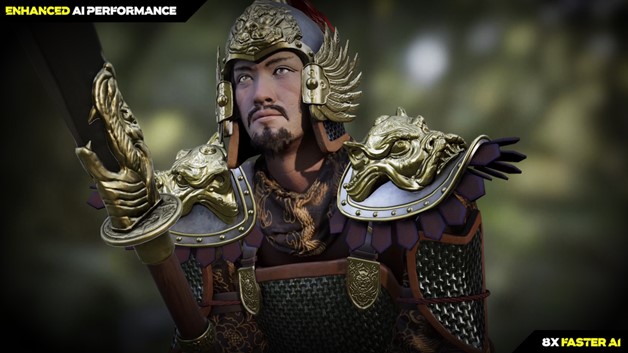 A-Series also introduces HyperLane Technology. These HyperLanes are eight individual hardware control lanes, each isolated in memory, that enable secure, efficient multitasking. It means you could run an AI task on the GPU at the same time as complex 3D graphics without slowdown. It’s made possible by what we’re calling HyperLane Dynamic Performance Control which ensures that the hardware is fully utilised. Any spare capacity is used to ensure maximum performance, and tasks can be prioritised to protect them from ever falling behind a certain threshold. You could, for example, run a dashboard cluster on the GPU at the same time as powering an infotainment system, and never have to worry that the performance of the vitally important dashboard cluster will suffer. HyperLanes can also be used to secure content. A video stream could be passed through the GPU, without fear of it being accessed by hackers – which is important in a set-top box or DTV. 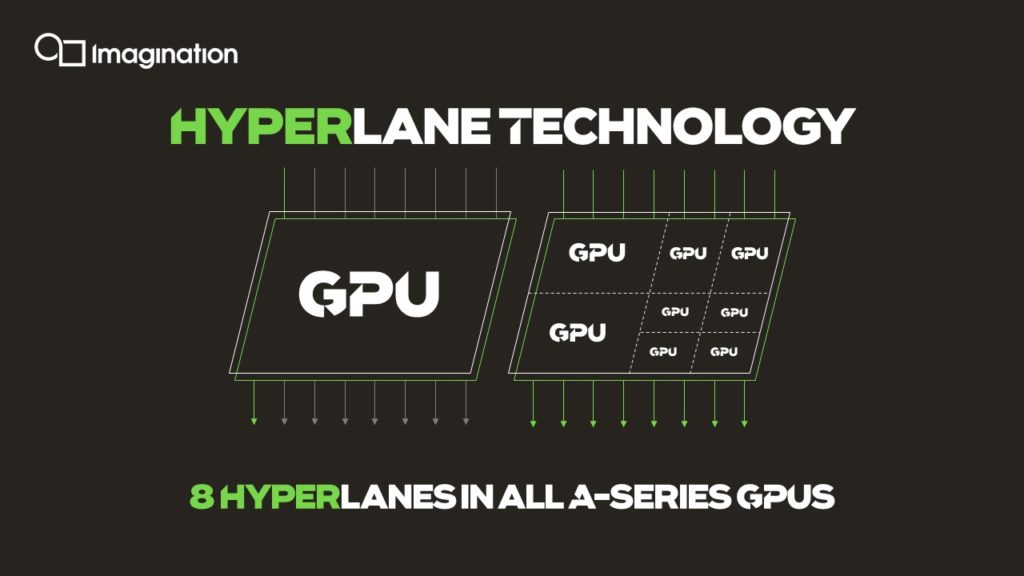 While AI can be run on the GPU when network models are suitably optimised you can run them on dedicated hardware, such as a PowerVR NNA (neural network accelerator) to get performance that is of an order of magnitude greater and at lower power. With A-Series AI Synergy you can now get an added benefit when you use our GPU and NNA together. Full programmability AI workloads can now run, with layers split across either the CPU, GPU or an NNA using the Imagination DNN API to ensure that workloads are run in the most appropriate place depending on the needs of the application.

These are just some of the features that have gone into making A-Series that fastest GPU IP available. We are confident that A-Series meets the needs of a wide range of markets, from mobile to DTV and automotive – it’s why we’re calling it “the GPU of everything, ” and with its ability to offer sustained performance without throttling it will, in particular, meet the needs of gamers. Naturally, it supports the latest standards, including Vulkan 1.1, so developers can make the most efficient use of hardware, from the smallest to the largest cores.

What’s more, A-Series is just the beginning and we have a roadmap of products based on this that will bring even more to the table in the coming months and years. For now, though, if you’re looking for the GPU for your next device, A-Series is the GPU you need.

We will be following up this post with others that delve further into how A-Series makes the difference for specific markets. For more news and announcements related to PowerVR, keep coming back to our blog and follow us on Twitter @ImaginationTech.