The future of graphics is here: PowerVR Series6XT GPUs go Rogue at CES 2014

CES 2014 marks the expansion of the PowerVR Rogue architecture with a new family of GPU IP cores designed to enrich what is already the best roadmap for graphics the mobile and embedded industry has seen. The new PowerVR Series6XT Rogue architecture drives performance to new levels while reducing power consumption even further through advanced PowerGearing mechanisms.

During the event, we’re launching the first four members of our PowerVR Series6XT GPU IP family:

The PowerVR Series6XT graphics IP family introduces even better levels of performance and the most comprehensive set of features designed to improve power management, reduce memory bandwidth requirements, offer superior image quality and accelerate time to market for our customers.

Let’s talk performance efficiency first. When we first introduced the PowerVR Rogue architecture, our goal was to deliver a new benchmark for performance in mobile. Every PowerVR Rogue GPU core has been fully optimised for maximum efficiency which means we’ve always focused on keeping power consumption to a minimum. Consequently, PowerVR Rogue-based platforms have been at the top of graphics benchmarks from Kishonti, Futuremark or Rightware – and will continue to do so thanks to the new performance improvements brought upon by PowerVR Series6XT.

In fact, we can now offer you a sneak peak at the next-generation GFXBench 3.0 rendering on our GPUs. The scene below offers a preview of how developers can use the latest OpenGL ES 3.0 features to achieve console quality effects such as deferred and volumetric lighting, fuzzy particle systems, dynamic video textures and depth of field on mobile devices. 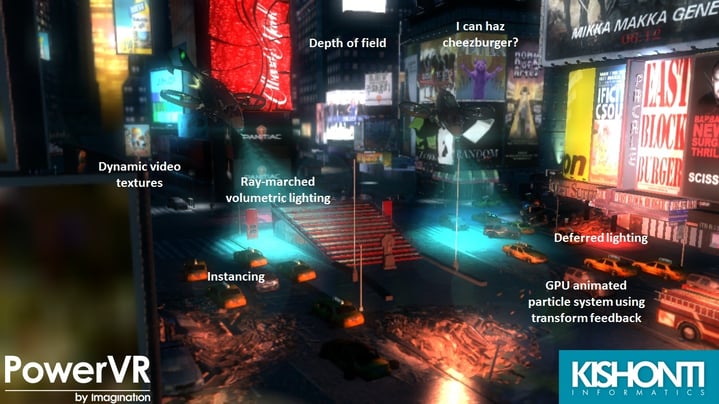 A screenshot of Kishonti’s GFXBench 3.0 rendered by a PowerVR Rogue GPU

Thanks to numerous efficiency enhancements, our new PowerVR Series6XT GPU cores are up to 50% faster clock for clock, cluster for cluster compared to their Series6 counterparts; these performance measurements are based on frames from industry standard benchmarks.

And since PowerVR Series6 GPUs have already proven to be faster than any other mobile GPU on the market, PowerVR Series6XT is set to maintain and extend Imagination’s leadership when it comes to high performance, low power graphics cores. However, as performance keeps ramping up, it is important to remember that power and area are still the driving issues for mobile designs.

We’ve addressed both these issues by providing a comprehensive roadmap of GPU cores that have a set of carefully selected features which enable the best possible performance for each segment of the mobile market. 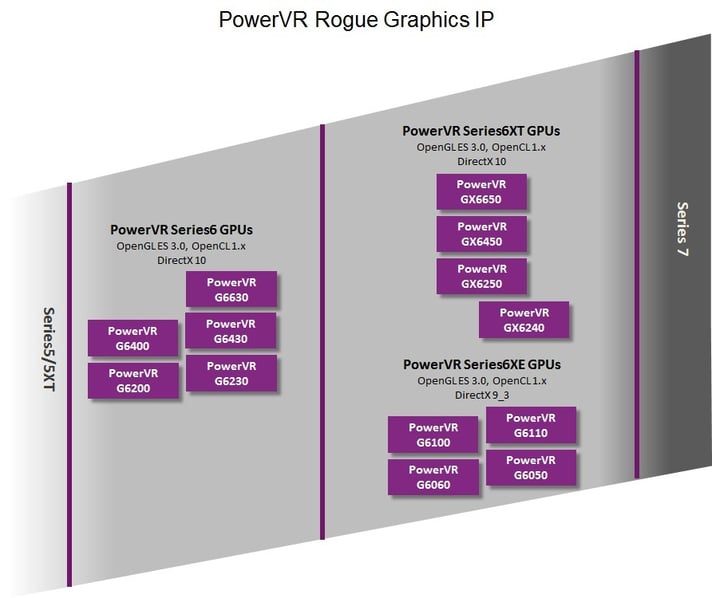 Power is particularly relevant for mid- and high-end devices; independent reviewers have seen countless examples of platforms throttling under graphics-intensive tasks. All PowerVR GPUs are designed to deliver sustained high performance while minimising heat dissipation thanks to a low power feature set that has been designed for real-world use cases. This feature set includes lower-power GFLOPS and PVR3C compression technologies.

Meanwhile, for silicon vendors that are targeting entry level platforms, area is becoming more and more relevant due to the costs associated with manufacturing larger SoCs. To address this, our partners can use our Design Optimization Kits (DOKs) to achieve an ideal balance of performance, power and area for their specific application. For example, the first DOK co-developed with Synopsys has reduced area up to 30% for PowerVR Series6 GPUs, while lowering dynamic power consumption significantly.

PowerVR Series6XT GPUs feature a number of performance improvements which have been achieved thanks to a combination of enhancements. We’ve added more low-power GFLOPS and made architectural tweaks that have boosted efficiency all-round; the list of enhancements includes:

With the improvements listed above, Series6XT GPUs are able to offer amazing computing horsepower per mm2 and mW, making them the perfect choice for handling complex user-interfaces, ultra-realistic 3D gaming, image/video processing, augmented/virtual reality and many other demanding graphics and/or parallel compute applications.

A comparison of image quality with and without Deep Colour 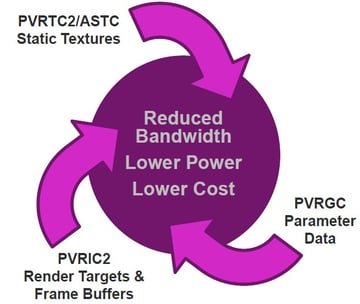 Firstly, PowerVR Series6XT supports lossy texture compression. This is designed to reduce static texture bandwidth and can go down to as low as less than one bit per pixel (1bpp). PowerVR Series6XT GPUs offer developers the possibility to use any of the existing texture formats below, creating the widest possible choice of industry texture formats: 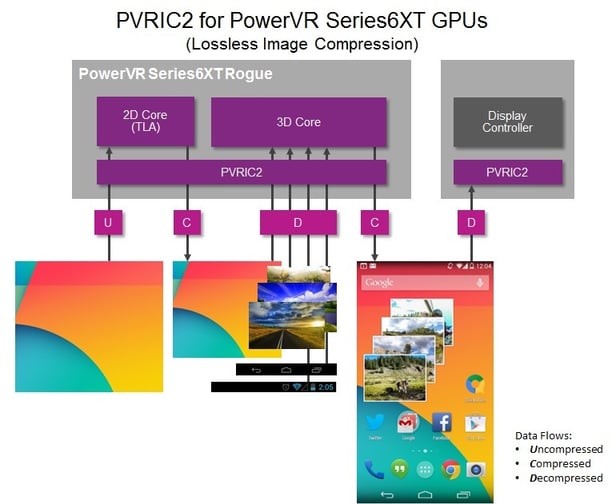 On top of the usual RTL deliverables, we’ve created flexible physical Design Optimization Kits to provide silicon vendors with reference design flows, reference layouts and documentation that enables them to tune for performance, power and area in an intuitive way that translates to a faster time to market with better resulting products.

Finally, PowerVR GPU cores continue to have the widest ecosystem support in the industry. We offer the best graphics SDK available for iOS, Android and Windows and provide training and support to developers big or small.

We also promote the widespread adoption of GPU compute in mobile by working with open source platform vendors and contribute to the development of OpenCL, Renderscript/Filterscript and other compute APIs.

For more news and announcements related to our PowerVR Rogue GPUs, please come back to our blog and follow us on Twitter (@ImaginationTech). If you are attending CES or MWC 2014, stop by Imagination’s booth to have a look at the latest demos and applications running on our customers’ PowerVR-based platforms.

* PowerVR Series6XT Rogue cores are based on published Khronos specifications, and are expected to pass the Khronos Conformance Testing Process. Previous generation PowerVR cores have already achieved conformance. Current conformance status can be found at www.khronos.org/conformance.