Coming away from CES this year one thought filled my head: the robots are coming! Having walked around the floor of this enormous show I saw enough to convince me that the 1950s vision of the robot in your house ready to do the chores isn’t quite as far-fetched as it once was. That’s not to say we’ll have C3PO or Kryten available to order next year of course; things will start a little smaller and rounder.

The opening day featured Samsung’s Ballie – a small, round ball that literally follows you around the house. The company described it as a “life companion”. It’s equipped with a camera so will recognise its owner and follow them around the house – your voice assistant made physical. It can do what they can do – take notes, or set up calendar reminders, but it can also recognise objects. We’re told it could even recognise spills on the floor and send for an automated robo-cleaner to deal with it. Presumably, it will recognise intruders but unless they attach lasers to it, it won’t be much of a deterrent, though it could send you an alert in the moment before it’s hurled out of the window.  The camera could also be used to capture fun family moments – the children’s first steps from a unique angle, for example.

A chef in the kitchen…

Staying with Samsung, one of the coolest things I saw at CES was “Bot Chef” – literally an extra pair of hands in the kitchen. Bot Chef is known as a “collaborative robot” or “cobot”, designed to make meals all by itself. It consists of two arms placed under a counter that can pick up utensils and bottles, squeeze them and pour ingredients into pans and chop, whisk and clean. It uses voice recognition and speaks back so it looks and sounds like something out of a goofy sci-fi show. As you can see in the video it can even reach up and open a cupboard, take a bottle out, use it, and then put it back. That’s something that my teenage children can’t do, so it’s quite impressive. If there’s a recipe or food pre it doesn’t know how to do it can download it on the fly – like the “I know Kung-Fu” moment from The Matrix.

… a buddy in the playroom…

Outside of the kitchen, CES offered up Omron’s Forpheos robot. Making its second appearance at the show, Forpheos is a robotic arm that can play table tennis and we were told that this year it’s even better at it. The company said that this year’s version can now detect emotions and heart rate to better understand the level at which it should play – slower and easier, or faster and more aggressively for a bigger challenge. Forpheos can also now see the spin on the ball and can return smashes better.

Both of these platforms show a sophisticated use of AI and computer vision in an increasingly sophisticated manner. To make a robot or machine appear not just intelligent, but emotionally intelligent is vital for them to be accepted. Of course, AI being able to determine how a person feels is in its infancy and could eventually be used to help hire someone, to conduct a medical diagnosis, or detect a security situation. We’re not there yet, but having a machine cook for us or play ping-pong with us is an important step on this path.

… and a helper in the workplace

Maintaining the combination of human and robotic interaction, Delta Airlines is working with Sarcos Robotics to create a wearable, full-body exoskeleton. As soon as I saw it, I had to stop and take it in; it looked just like the industrial machines that Ripley uses in the movie Aliens. As the demonstrator explained, Delta wasn’t using it to make work faster, but primarily to make it safer. 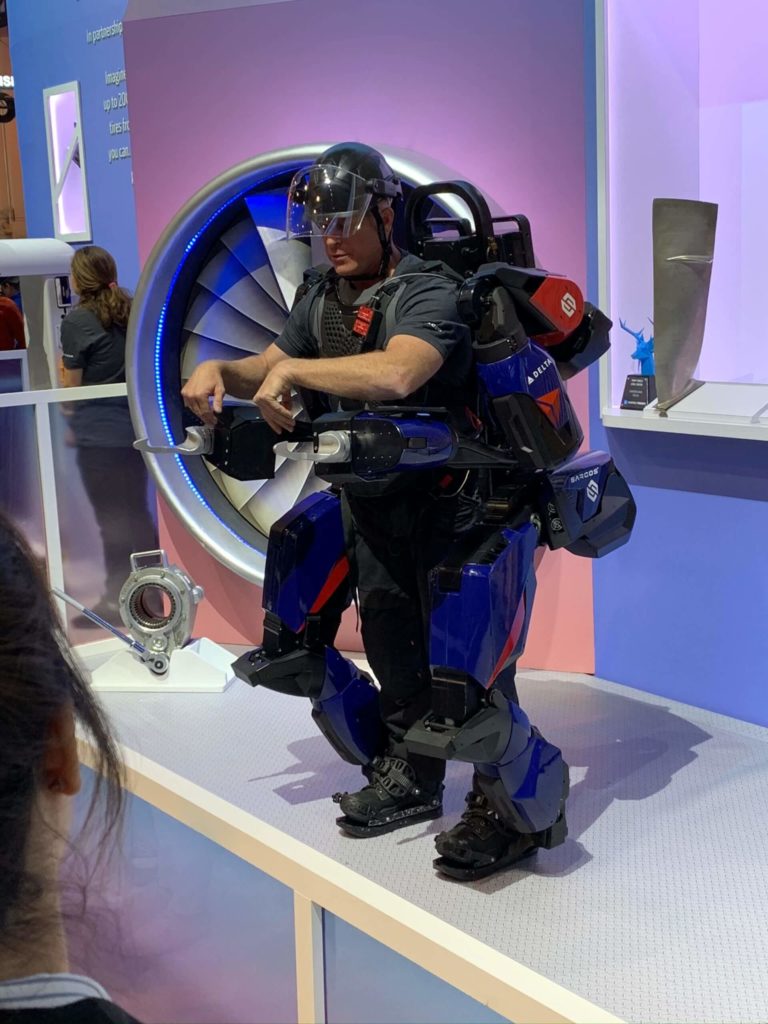 Using one of these, its worker can pick up items that would normally be too heavy for a single person to lift and not have to worry about straining themselves in any way. You could also see this type of technology being used to help disabled people do things they wouldn’t otherwise be able to do, be it just moving about more easily or take part in activities such as races.

On a similar theme, a Chinese company called BrainCo was showing an AI-powered prosthetic arm. It gave its wearer the ability to pick up and manipulate objects using a combination of his brain and AI – truly transformational for amputees. It uses sensors in contact with the skin and can pick up signals from the brain to make precise movements of individual fingers. Shaking hands with the gentleman felt perfectly natural.

As we can see, the combination of AI and robotics are making the leap from sci-fi, to sci-real and it will be fascinating to see the rate of progress and the technology improves and the costs come down.